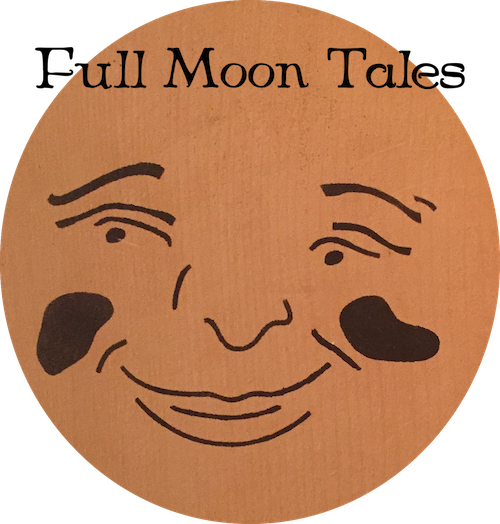 The third moon in my lunar year is the Wolf Moon. It is new between 28 December and 25 January and full between 11 January and 8 February. This is the coldest time of year in the North. It is when stores of food are running low and hunger is stalking every home. This inhospitable month is also the breeding season for wolves. They are calling to each other in the lovesick long nights of deep winter. I was born under the Wolf Moon. I hear the calls of coy-wolves in the night and feel the warmth of belonging.

In the time of the Wolf Moon, the nights are still long, but usually the lengthening of daylight is perceivable. This subtle shift was once marked by an odd English Candlemas custom. On the morning of 2 February, the steward of a large estate would give a candle to the manor lord, symbolizing the declining need for artificial light during the morning chores.

This is the coldest time of year in the North. This is likely to remain true even as we head deeper into climate breakdown. First, at this point in the solar year, the northern hemisphere has experienced short days for many months. Stored surface heat has dwindled and can’t moderate temperature as effectively as it did in the long nights leading up to the solstice. This moderating effect is why we see a time lag between the length of daylight and the seasonal temperature peaks. It’s colder after the winter solstice; it’s warmer after the summer solstice. It takes a while for heat to build up on the surface in the long days of summer and then a while for it to dissipate again in the short days of winter.

Another reason the north will remain cold at this time of the solar year even in the midst of climate heating is down to climate change itself. Several factors are woven together. In the northern Atlantic region, there has been a sharp increase in cold glacial meltwater from Greenland, cooling the ocean and the coast. This is coupled with a decrease in tropical ocean currents bringing moderating warm waters north as the North Atlantic Current shifts south under pressure from those cold glacial meltwaters.

There is also a destabilizing effect from the warming of the Arctic. While it is warming, it’s still colder up there than further south. Any air flow that comes from high latitudes is going to be relatively colder. But now there is less of a temperature gradient between polar regions and the temperate regions to the south. This softening of a formerly hard boundary is letting more air circulate between the two regions. The circumpolar air flow, the polar vortex, sends projecting loops of arctic air into the temperate south, pushing the northern jet stream deep into the south and inhibiting any air flow from the south. Which all makes for long chains of very cold days — even weeks — in the period around the solstice.

These bulges in the polar vortex will only become more common as the polar region warms and that smooth circumpolar air flow breaks down. So for the short term (geologically speaking), it will be cold. It will also very likely be drier than it used to be because the air flowing from the north is not able to take up ocean moisture. So the time around the Wolf Moon won’t be as snowy white as it once was. But it will be cold!

After that long digression establishing that it is going to be cold this time of year (sorry, once a geologist…), why Wolf? It is the one of the few traditional names found in both European-derived cultures and in many of the cultures of Indigenous North America. I suppose, northern humans have always seen the wolf at the door at this time of year because it is cold, dark and nothing is growing. There is no food except what small game you can hunt. And there are equally hungry hunters who might be hunting you in the long darkness. I’m not sure I believe that wolves regularly attacked human settlements, but it’s probably a healthy caution if you’re going out in the woods at night. At any rate, the hungry canids may well be carrying off your livestock, your own food stores — because a penned animal is very easy prey, like food on a stick to a hungry wolf. Hard to turn down when your belly is grumbling.

But another reason this time of year is associated with wolves has to do with their breeding cycle. Wolves have but one breeding season — late winter. Our ancestors heard wolves howling at the moon at this time of year not because those wolves were coming for them — though that made a good metaphor for the hunger that was stalking humans and wolves alike — but because those wolves were singing love songs to potential mates. I tend to think our ancestors knew about wolf breeding cycles. They were keenly observant of their world. And, as evidenced through widespread adoption of the wolf as clan totem, many of them felt deep kinship with wolves and would thus have been extra aware of these fascinating beasts.

These days, anthropology gives us new evidence of our close relationship with wolves. It is very likely that wolves and hominids learned from each other. Of course, we worked together to hunt, though it may be more that humans scavenged off wolf kills under the protection of pack benevolence. But it also seems like canines may have taught our species the benefits of cooperation and care, the rules of pack life, the advantage of orienting ourselves around the family and the home. We say that we domesticated the dog, but it may be that wolves domesticated humans.

I sometimes think dogs are the shepherds the wolf clan set on the infantile human species and that they diligently watch over us still — protecting us even from ourselves. Perhaps especially from ourselves…

Here is my vision of that protective bond in a Full Moon Tale for January.

He is always hungry. Slouching through damp, deserted streets. Eyes darting from window glass to rat-palace trash bins. He wants always. His need is as bottomless as the sky. If he could eat starlight he would fly off into the night and feast for eternity.

In daylight, he wears a submissive face and the quotidian uniform of the middling world. He is ordinary. But for the blood that will not wash from under his manicured fingernails and the fathomless emptiness of his eyes. Or perhaps that emptiness too is standard in his circles. Perhaps even the blood. So much of it on the hands of those who never see their victims.

Where he walks it is deadly cold. Footsteps of ice to sear the heart at his passage. No amount of summer will thaw his own core. He is the implacable glacier, freezing and fracturing all in his path. He may stay his advance under the light of long days, but he does not retreat, does not cower in caves awaiting winter. He carries his own climate of numbing indifference.

The wolves curse him. They do not call him brother and will not hunt in his wake. They smell the greed on him. They know his diseased heart. They do not fear because wolves do not fear, but neither will they go near. They know the contagion of cold mediocrity. They will not willingly expose the pack to such damage.

The old women weave nets to entangle and ensnare. They harry him from village and hearth with their cackling laughter and burning brooms. They are the enemy. These, he kills and does not consume. He fears their brazen insolence. They do not follow the rules, and he is a creature of rule.

The old women and the wolves, they band together under the January moon to flush him out. They bring fire and passion and fling fistfuls of sticky webbed guilt. He does not feel. He is not alive to this world. He is hunger and no more. But guilt does get caught in his craw. It becomes hard to swallow. They impede his progress.

The enemies howl and jeer at his choking incapacity and then melt back into the world of flow. Whither he can not follow. He does not bend to need. He is stone, fixed on his course of destruction and acquisition.

And he does not understand mutability. There is but one mandate in his mind, to ingest. He takes without contingency. Except for wolves and old women. And that only because he is unable to stop their noisy insubordination. He tells himself that they are no more than insignificant gnats hovering above his eternal sucking mire. But still, he is uneasy under the Wolf Moon, the time of his full strength.

So he slouches through streets laid by his fathers from the bones of his mothers. He flashes his reptilian smile at the cameras. He wears the face of nothingness. And he eats.

But we, the old women and the wolves, we are bringing the thaw. His days of insatiable want are now numbered. His progress will ebb and wane with the silver sickle moon. And soon this age of ice will melt away from the newly greening world.